A. The restruction of VINASHIN – The establishment of the Shipbuilding Industry Corporation (SBIC)

– In year 2013, the restructuring process of Vinashin has been completing and it was reformed as the Shipbuilding Industry Corp (SBIC), a one member limited liability company owned 100 per cent by the state, set up using VND9.52 trillion ($452 million) of capital. It  will be state-owned with eight subsidiaries, they include:

** Nam Trieu shipard will be kept a part belong to SBIC as a department which controled by SBIC. The other parts will be transfered to Bach Dang shipyard’s control.

– The development plan for the shipbuilding industry has approved by Prime Minister Nguyen Tan Dung , effective through 2020 and with a view to 2030.The plans aims to tap into the capacity of existing shipyards while constructing new yards and repair facilities.  Under the plan, Vietnam also strives to establish a number of large-scale ship repair centres in connection with major sea ports and international maritime routes.

B. The shipbuilding projects in year 2014

B.1. The uncompleted vessel project at its shipyards.

SBIC has built a plan to construct continously the uncompleted vessel projects at its shipyards. There are 10 vessel projects which need to delivery in year 2014 & 2015. They are : 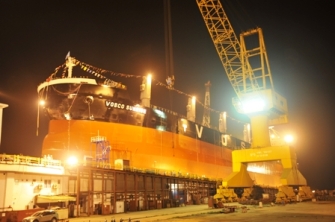 3. The bulk carrier 53,000 DWT ( NTA04 ) : will be completed within 15months at Nam Trieu shipyard. The old owner is Bien Dong shipping company.

4. The bulk carrier 20,000 DWT No.2 : will be completed within 12months at Nam Trieu shipyard. The old owner is Vinalines. This vessel will be modified to the cement carrier. The equipment will be took from 22,5 BC ( BV11 )

8. The bulk carrier 20,000 DWT – Vinashin Bay  : will be completed within 1 month at SSIC shipyard. Its propulsion will be replaced the new one.

9. The container vessel 1,730TEU-V21 : will be completed within 1 month at Ha Long shipyard. The old owner is Vinalines container shipping company.

B.2. The new shipbuilding projects

In year 2014, SBIC has got some new building projects for the domestic firms, Vietnam naval and DAMEN group… They are :

– About 20 vessels of the fisher protection vessel project of Department of Fisheries and Resources Protection of Vietnam.  These vessels will be built at Thinh Long shipyard, Bach Dang shipyard, Pha Rung shipyard, Song Hong shipyard…