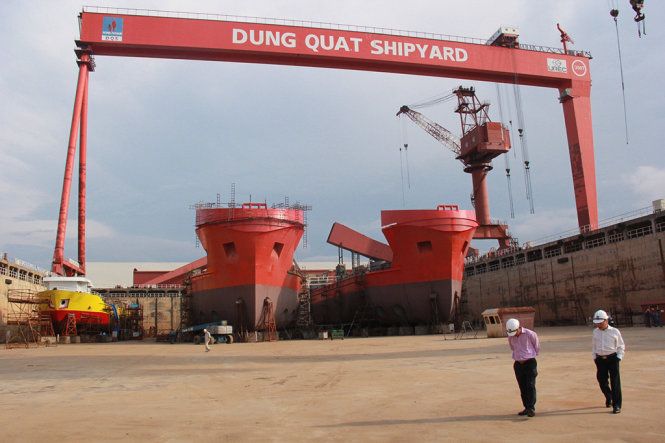 PetroVietnam has proposed a solution to salvage five of its loss-making projects, making up almost half of the company’s list of 12 loss-making megaprojects all funded by state capital.

In April, the Vietnamese government publicized a list of 12 so-called megaprojects, all managed by the Ministry of Industry and Trade, that have accumulated aggregate losses of nearly US$3 billion.

PetroVietnam, the country’s oil and gas giant, is responsible for five of these projects, namely the Dung Quat Shipyard, PVTex Dinh Vu and three ethanol plants.

In a recent report, PetroVietnam sought government permission to put the shipbuilding company up for sale.

However, if the shipyard fails to find a buyer, PetroVietnam will declare bankruptcy and auction off its assets and properties.

Both the sale and bankruptcy options indicate that PetroVietnam has given up on its plan to ‘revitalize’ Dung Quat Shipyard, an ambitious commitment the oil and gas company made when it acquired the shipbuilding firm from the now-defunct Vinashin in 2010.

Upon the acquisition, PetroVietnam’s leaders said they were committed to revitalizing the shipbuilder.

However, seven years later, the shipbuilder’s debts have risen to VND6.9 trillion ($303.96 million), which are in addition to its negative equity of VND1,152 billion ($50.75 million).PetroVietnam invested nearly VND2 trillion ($88.11 million) in increasing the shipbuilding company’s chartered capital, and another VND3.1 trillion ($136.56 million) to repay its debts.

While PetroVietnam appears to have admitted that Dung Quat Shipyard’s financial position is ‘incurable’, the company remains optimistic that it can rescue the other four ‘sinking ships’ — the yarn plant and three ethanol making factories.

As for the Dinh Vu plant, located in the northern city of Hai Phong, PetroVietnam said it is currently seeking cooperation with foreign partners to boost the facility’s performance. The plant had incurred losses of $312.5 million as of April 2017.

PetroVietnam has also proposed recommencing operations at the Binh Phuoc ethanol plant in southern Vietnam by the end of this year. However, the proposal has yet to receive the approval of the company’s shareholders.

The Dung Quat ethanol plant is also expected to resume operations in early 2018, while no timeline has been set for the restart of the Phu Tho facility, according to PetroVietnam.

The respective losses of the Binh Phuoc, Dung Quat and Phu Tho ethanol-making facilities as of April this year were $75.89 million, $227.46 million and $111.61 million.